Richard Lord, Media & Operations Director at media agency Meta Media, says that 2020 proved to be a tumultuous year for advertising. Overnight, budgets were cut, strategies were changed, priorities re-looked, but some platforms fared better than others.
TV benefited from a captive, stay at home audience with more time on their hands. Newspapers and magazines suffered as traditional distribution channels were decimated. OOH fell off a cliff as there was nobody out and about. And the platform that arguably benefitted the most? Digital.
We saw increased numbers of people online seeking entertainment, looking for news on the pandemic, shifting their shopping patterns online, and trying to stay in touch with their friends and families.
This is the reason why we have seen increased investment by advertisers into social media platforms, and other forms of digital advertising as well. In fact, digital ad spend grew by double digits year-on-year (almost 20%), while overall ad spend declined for the first time in decades.
According to the recently published 2021 Social Media Landscape report by Ornico and World Wide Worx, there are currently 38.2 million internet users in South Africa (about 64% of our total population).
This number grew year on year by 1.7 million users (or 4.5%) while active social media users increased by 13.6% from 22 million users in January 2020 to 25 million users in January 2021. This means that almost 42% of all South Africans are using some form of social media!
Advertising is a numbers game and where the numbers are, the money goes. Digital is therefore well placed to continue seeing double digit ad spend growth over the next few years as we see more and more people being connected.
So where can we find these social media savvy South Africans? According to the Ornico and World Wide Worx report, the most popular social media networks amongst 16-64 year olds are: 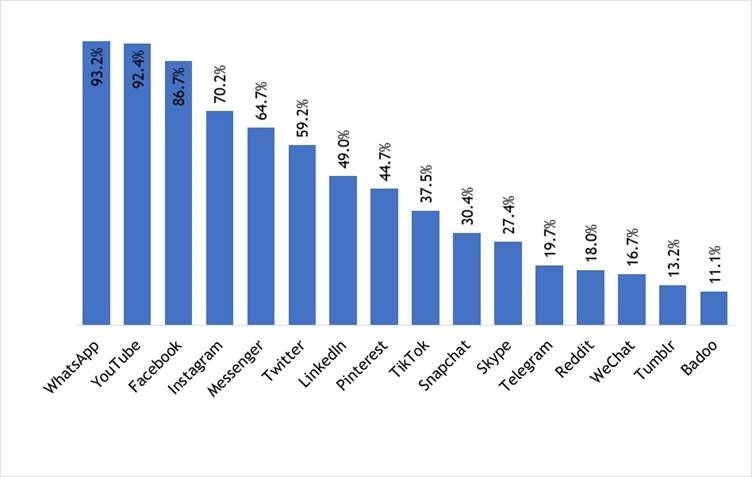 The report further reveals that social media is the second biggest platform (after TV) amongst internet users in South Africa for people to discover new brands and products.
This makes social media an exceptionally powerful platform for advertisers. With massive numbers, social media can provide advertisers with reach in buckets. Reach, as we all know, is critical to the success of any campaign.
The different platforms also allow for that reach to be targeted to the individual needs of advertisers. Better targeting means increased relevance, better noting, better recall, less wastage, increased efficiencies – and, in theory, improved performance.
In theory because, as per the graphs above, many advertisers see social media as an effective platform, but many are still measuring their success based on outdated metrics that don’t really add to a company’s bottom line.
Vanity metrics such as likes, shares, or comments might look good on a marketing dashboard, but there is plenty of research to show that these metrics very rarely translate into sales or business growth, which surely must be the lifeblood of any organisation. Just because someone likes your ad, doesn’t mean they will actually go out and buy your product!
While it is encouraging to see the growth in internet users, the corresponding growth, and willingness of advertisers to put ad spend behind the platform, the fact that there is an ever-increasing number of advertisers who claim that their social media advertising is not bringing them any brand gains, is a cautionary yellow flag!
It is becoming more and more essential that brands start to put proper measurement and success criteria in place for their social media (and broader digital) campaigns.
That is the only way we will see meaningful, and sustained growth. Success breeds success. When advertisers start to see real business growth that is attributable to their use of digital media, only then will they be truly convinced to start putting real money into the platform.
Meta Media DNA
Meta Media is South Africa’s newest full-service media agency and member of the IPG global network and Nahana Communications Group of specialist agencies, each with their own independent structures, cultures and management teams and a desire to work together where synergy exists.
Borne in an era of data and technology and built on the premise of creating the agency of the future, Meta Media provides solutions based on data and real insights to give its clients an advantage. They look beyond the numbers for the story behind the story. They stay curious!