South African retail stores have started to experiment with measures to encourage social distancing, even in their payment queues, as part of efforts to slow the spread of the virus behind Covid-19.

But initial efforts have met with mixed success so far, anecdotal evidence suggests.

In one store we visited, customers were strongly encouraged to stay about one metre apart from one another (somewhat less than the 1.5 metres currently recommended) – but were then served simultaneously at till points jammed up close to one another, while many other till points were not in use at all.

In other stores customers either did not follow instructions, or did not understand the sometimes subtle markers intended to keep them away from one another.

Here’s how we’ve seen some South African stores are trying to maintain social distance to help slow the spread of the SARS-CoV-2 virus.

Some stores are using markers to show where they would like customers to stand. Some of those markers are pretty explicit – and extremely well signposted. Others are a lot less jarring – and less obvious. Stores in the same group have different approaches to the problem of keeping people apart in queues. 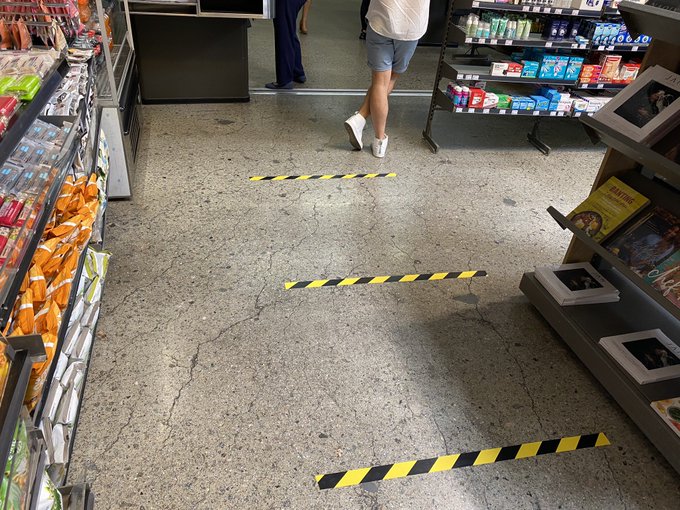 We saw differences in markings at different Woolworths stores, while some of their peers had made no arrangements yet.

The same was true for Dis-Chem, where one store asked customers to stand in a certain spot – while another had no-go zones instead. Other retailers, such as Makro, have promised to roll out measures to keep customers at an appropriate distance in their stores. But as of Saturday the vast majority of retailers – including massive supermarkets and those dealing in health and wellness – had made no such changes to their stores yet.

Retailers have a legal obligation to keep prices of some items in check during the coronavirus disaster, and every South African is legally required to adhere to emergency rules that, among other things, criminalise the spreading of fake news about Covid-19.

But other than a ban on gatherings of more than 100 people (or 50, where alcohol is sold), social distancing is a voluntary measure, and there is no obligation on people to stand far apart, or on businesses to encourage them to do so.

Global trade of disinfectants has doubled over the past decade